I am addicted to Spotify, I have Linux, I L💖ve F# so I decided to give it a try to control Spotify on Linux using Terminal. Join the ride! We will add a nice feature that will allow us to download lyrics of the current song and we will meet D-bus and Argu - F# library which makes building CLI apps fun! I will also show you how to publish and use the app in Linux.

Lately, I got inspired by the python program spotify-cli-linux written by my friend. I decided to write the port of this app in .net core in F#. If you can't way to see the source code here it is.

D-Bus is a message bus system, which allows inter-applications communication. Also, D-Bus helps coordinate process lifecycle; it makes it simple and reliable to code a "single instance" application or daemon, and to launch applications and daemons on demand when their services are needed. Linux desktop environments take advantage of the D-Bus facilities by instantiating not one bus but many:

The purpose of D-Bus should be clear - simplify:

You can read more about D-Bus on freedesktop.org [1]. We will focus on Spotify but The list of Desktop apps using D-Bus is long and may give you some inspiration [2]. Before we start to code let me introduce you D-Feet which is a nice GUI app which allows you to control and explore D-Bus: 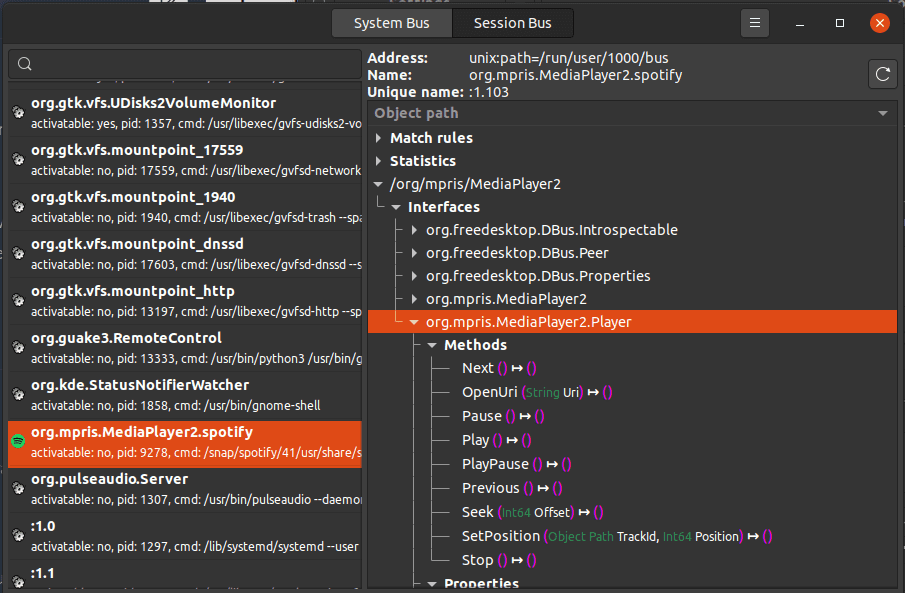 It may help you to get to know the D-Bus interface of the application you want to integrate with. You can even send some signals and test the application behavior without writing any code.

2. Connecting to D-Bus with F# and interacting with Spotify.

How to connect to D-Bus using .NET? I googled a little bit and found Tmds.Dbus package by Tom Deseyn [3] which seems to be the easiest way (and the moment probably the only way if you don't want to struggle with sockets, buffers, streams, etc). The samples are in C# but I did not see any obstacles to write the code in F# and hide the package object-oriented nature behind more functional friendly mechanisms.

According to documentation to model a D-Bus interface using Tmds.DBus we create a .NET interface with the DBusInterface attribute and inherit IDBusObject. We can do this in F# easily. Next, a D-Bus method is modeled by a method in the .NET interface. The method must to return Task for methods without a return value and Task

I don't like some ideas in the library but it's made in C# for C# devs for sure so let's be happy that someone did the hard work for us [4]. Let me show you the code which creates the D-Bus connection and simple API which will allow us to use the module in a more F# friendly way.

This should be simple enough;

Time to retrieve the song and playback status:

If you wonder how I knew about the Dictionary keys - well I simply used the Mentions D-Feet app to examine the contents. The test below demonstrates module usage:

The hard work is done (actually it wasn't that was it?) Let's implement play/pause/next/previous, etc signals:

Oh yeas, pattern matching |> I Love. That's it! The tests;

This works like a charm. I have the tests skipped in Github's actions for the obvious reason - Spotify is not installed on GitHub agents.

There was a time that Spotify offered this feature but it was removed for unknown reasons. I miss it so let's add this feature to our CLI app. I've created a separate project for this so I can change the API easily without touching D-Bus. I've found a simple and free API named Canarado that allows us to search for lyrics by song name. Let's do this and filter out the matching artist. If our filtering will cause an empty result let's return the original set of lyrics. I've started with learning tests [4] that can be found in the repository if you are interested. The code is simple;

That was simple, wasn't it?

At the time of writing the blog post something happened to Canarado and it stopped to return the lyrics (its empty string now). I've created the GitHub issue here: https://github.com/canarado/node-lyrics/issues/1. If the situation won't change in a week or two I will write an update to the blog post with chapter 3.2 with an alternative.

4. Creating the CLI with Argu

Let's do a quick recap:

Let's host these functionalities now by command-line app. To help with arguments parsing I was looking at two libraries:

I decided to give it a try with Argu. I have started with arguments specification;

I am not sure if I've modeled the requirement that you can specify only one argument when running the app - If you know Argu better than me let me know in the comments I will be happy to change this. I couldn't find a better way in docs or examined examples. All in all the [<First>] attribute means that the argument has to be in the first place - in another case Argu will return an error during command argument parsing. The interface with the Usage member helps to generate usage instructions:

Some comments to the code:

Now we can use spot --help, spot --next and so on easily! Remember that the alias will vanish upon reboot. To make it live longer we have to put the alias here: /home/[user]/.bash/.bash_aliases. Simply add the same line at the end of the file (create the file if it doesn't exist). Save and close the file, a reboot is not required, just run this command source ~/.bash_aliases and you are good to go! Have fun.

We have covered a lot!

I use my new commands daily. It's easier to open terminal (I use Guake Terminal so ctrl +`) and type spot --next instead opening Spotify, look for the control and press it. Printing the lyrics is equally fun. Hear you next time!

Footnotes:
[4] To be honest I really don't like the Async postfix in methods names - I understand that they are needed in libraries which have to support both synchronous and asynchronous model but besides I see them obsolete. And interfaces... well... the library is written in C#, samples are in C# so It is written for C# developers, let's just do what we have to do and let's be happy that F# supports interfaces.
References: