So the company is paying you and other people in the team money for accomplishing certain things... for building products, delivering features, solving problems, doing maintenance. You work hard, so do your peers. What about making the sprint-backlog even more transparent and automate a shout-out of what had been done in the sprint?

Participants in the sprint review typically include the scrum team, management, customers, and developers from other projects (so basically anyone in the company + external people). Let me emphasize that the review by the development team for the product owner and some kind of manager only is an antipattern. This antipattern is so popular (at least I was there) that going out of this comfort zone (and antipattern) is hard because you used to review your work with the people you work with (doesn't this sound stupid?). But once you get out of the comfort zone, you won't ever want to go back.

1.1 Keeping all those people informed...

Before each review how would you inform the people on what was achieved during the sprint? I have experienced 2 patterns;

2. What is sprint hawker anyway?

I was inspired by the name of the old newspaper selling boy - newspaper hawker (you must have seen one in the movies!): 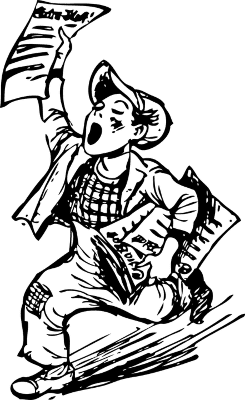 The hawker used to shout about the most important news to all the people around. If someone was interested he went to the hawker to buy the newspaper. The sprint hawker also shouts about the sprint completed tasks and if someone is interested can join the review to know more. Everything you have to do is to finish the sprint (release new newspaper) and let the hawker shout!

How it can look like? Let's have a look at the sprint hawker (I had to withhold some information) I created using Azure logic app and slack:

No one has to do anything! It is a time-triggered action that reads data from a work item query. If you are not interested tn Azure DevOps + Slack implementation go to the last section to read the summary.

The setup is really easy and I am sure you can replicate the behavior using a different stack (Jira + AWS Step Functions, Azure functions, etc).

In Azure DevOps go to Boards -> Queries, then click the "Add query" button. The query to get the work items should be something as simple as this:

Remember to customize the columns (using "Column options" button in the edit), I have selected: ID, Work Item Type, Title, Assigned To columns. Save the query as shared queries, otherwise logic app won't be able to access the query.

Let's create a new logic app in the Azure portal. I will go with the designer - the logic app json is not something I am keen to write :) Let's go step by step.

Done! Remember that you can always trigger the Logic App manually, make sure that the query returns something. Now you can copy the logic app json and prepare a proper arm template for repeatable infrastructure deployments.

4. People reactions and other conclusions

We were all worried before the first announcement (even after 2 or 3 test runs). The first two things that came to my and other team members minds was;

To sum up the team is delighted!

People outside of the team are also delighted. Everyone knows that every Friday at 1:00 PM (CET) there will be an announcement and reminder that in one hour we will start to review our work and show some new cool features! No one has to go to the sprint backlog - everything is listed right in the communication channel. Even is someone is ultra-busy he can quickly catch up when joining the meeting.

I think that you can play a little bit with your hawker. Some ideas:

Note that the sprint hawker focuses on the "demo part" of the review and may prepare an agenda for the demo. Remember! A Demo is just a minor part of the review meeting.